Is it safe to travel to Eastern Europe at this time?

Is it safe to travel to Eastern Europe at the moment?

Since the outbreak of war in Ukraine due to the invasion of the Russian army, concerns about air safety in Eastern European countries have been affected. Fear, dread and uncertainty have gripped much of the European public. However, is there a real danger in flying near countries such as Poland, Hungary or Slovakia, and can private flights be made to destinations close to the Russian border?

As soon as the invasion of Ukrainian territory was confirmed, the European Union Aviation Safety Agency (EASA) warned airlines transiting through Ukraine, Moldova, parts of Belarus and Russia that they will immediately stop their services due to the potential risk of flying in these areas. The airline industry is not willing to risk a situation like the one that occurred in 2014 with the downing of a commercial flight like Malaysia Airlines MH17, which was shot down by missiles launched by pro-Russian rebel groups while flying over the Donbas region. This is why airlines are avoiding Ukrainian airspace in accordance with the guidelines issued by the aviation authorities. As the days have passed, airspace bans and sanctions have solidified in Europe and Russia has retaliated, significantly changing the scope of global air travel.

Despite the positive predictions that were expected in 2022 due to the undoubted improvement in the Covid-19 situation, a survey conducted by travel agency MMGYGlobal reflects a different picture than expected. 62% of respondents are concerned about the invasion spreading to nearby countries, while 38% intend to wait for the conflict to evolve before confirming flight bookings.

How does EASA decide which countries are safe to fly over?

The air regulator updates weekly assessment reports on the airspace around Ukraine through the Conflict Zone Information Bulletin, which can be found at the attached link. Currently, the regulator warns against overflying the regions of Ukraine, Moldova, Russia and Belarus due to the risk involved. "Operators should not operate within the aforementioned airspace, including landing and departures from airports located in the affected airspace. In addition, operators should exercise caution when operating throughout the Moscow FIR (UUWV) due to intensified military activity that may include the launch of medium-range missiles penetrating controlled airspace. Operators are reminded that operations within FIR MINSK (UUWV) are prohibited in accordance with EASA Safety Directives SD-2021-02 and SD-2021-03." 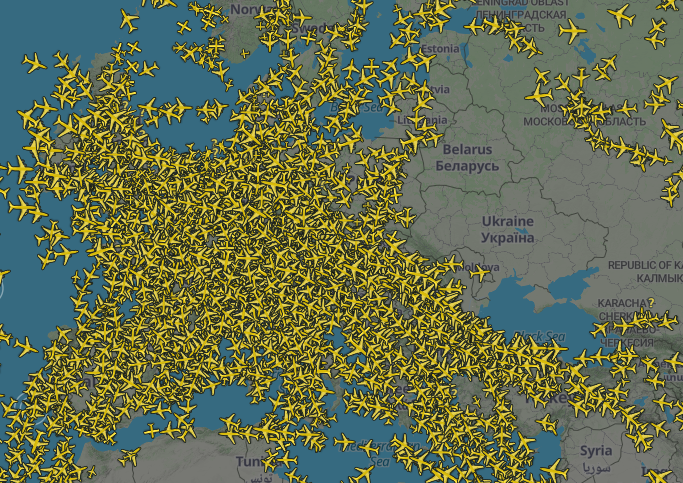 Which countries have taken action against Russian aviation?

All 27 EU member states, along with the US, the UK, Albania, Canada, Iceland, Norway and Switzerland, have chosen to ban Russian flights from entering their airspace. In return, Russia has also banned flights entering its airspace.

Is it safe to fly to neighbouring countries such as Poland and Hungary?

Yes, it is still safe to travel to Poland, Hungary and Slovakia, but we recommend checking the latest news on restrictions before flying.

"I need a private plane for a business trip to the Baltic States in a few days - will I be able to make the flight?

Airlines continue to fly on time in and out of the Baltic states, Estonia, Latvia and Lithuania - meaning that aviation experts consider it safe to do so.

Former Soviet nations and NATO members have deployed troops to reinforce their borders with Russia and Belarus. There is no sign of this affecting travel between the Baltic countries or from other destinations, but tensions in the region are high.


From Europair we are at your service to bring you closer to the world of private aviation, we will advise you throughout the process, answer all your doubts, and find the best type of aircraft according to your needs...

Do you have a business trip to Eastern countries in mind, or would you like to consult the possibility of making it with a private flight?

Get an instant price estimate on our private flight's page, contact us at web@europair.es or call +34913952025.