How does the aviation sector affect the international economy and tourism?

How does the aviation sector affect the international economy and tourism?

There are numerous reasons to say that in the transport sector, aviation is the absolute leader in terms of economic impact. Not only does it generate employment, but its web of impact goes far beyond its own category within the mobility sector. The tourism sector, international business or the ability to enable knowledge of cultural richness make aviation the undisputed protagonist of economic and social impact at the intercontinental level.

The International Air Transport Association (IATA) commissioned Oxford Economics to estimate the economic and social benefits of aviation in more than 80 countries around the world over the past three years. The analysis includes the traditional economic footprint of the sector, measured by the contribution of aviation to gross domestic product (GDP), jobs and tax revenues generated by the sector and its related supply chain. However, the economic value created by the industry goes beyond the value captured by these measures.

Therefore, the study also investigates the positive impacts of the connectivity provided by air transport services. Connections made between cities and markets produce an important infrastructure asset that facilitates productivity-enhancing activities between nations. More specifically, air transport enables foreign direct investment, cluster development, specialisation and other activities that directly affect the population and the value of a country's gross domestic product.

THE ECONOMIC FOOTPRINT OF AVIATION

The aviation sector directly generates employment and economic activity in several areas, such as airline operations and ground infrastructure. The direct impact of the aviation sector on jobs and GDP of any nation is reflected in the national resources used to provide all these services. According to an ATAG study on the impact of the aviation sector on the global economy, it estimates that the aviation sector is responsible for 3.5% of global GDP, directly generating 62.7 million jobs. The study states that in 2016 it reached 4.1 billion passengers per year and 110.3 billion tonnes of cargo. In the case of Spain, in 2018, Spanish airports handled a total traffic of 263.7 million passengers, with a growth of 5.8% compared to the previous year.

The rapid increase in the number of passengers is not only the result of a cyclical situation in recent years. This is shown by the fact that, since 1990, passenger traffic in Spain has multiplied by more than 3.6 times, and that, despite difficult situations, air transport has maintained a constant growth trend, growing worldwide by more than 60% in recent years. An example of this is the rapid recovery and rise in flight bookings compared to pre-pandemic levels.

Estimates by the major aviation organisations continue this growth trend, with air traffic expected to double in the next 20 years. The aviation sector also contributes to other industries by facilitating their growth and supporting their operations, even if these industries are far removed from the direct or indirect components of the aviation sector itself.

For example, air transport acts as a catalyst for wider benefits in its role as a critical component and facilitator of global business and tourism. Through its speed, convenience and affordability, air travel has increased opportunities for both leisure and business travellers to experience a wide range of geographies, cultures and markets. With 51% of international tourists travelling by air, the aviation sector is central to the tourism industry, which in turn is an important source of economic growth for many countries, especially developing ones. Globally, air transport supports 34.5 million jobs in the tourism sector and contributes some US$ 762 billion per year to global GDP according to Oxford Economics.

The development of the aviation sector in recent decades has led to improved air transport connectivity. As a result, air passengers have reaped a number of benefits, such as reduced travel time, increased availability and frequency of services, improved schedules and improved overall service quality (including improved reliability and punctuality). In addition, improvements in connectivity have also led to a gradual decline in air transport costs. The cost of air transport services, in real terms, has decreased by around 1% per year over the last 40 years. Air transport has also become more affordable compared to other modes of travel: its relative cost has fallen by 2.5% per year since the 1990s.

This development has contributed to the rapid expansion of passenger and air cargo volumes over the last 40 years. Air transport has also become increasingly competitive with other modes of transport. Apart from the benefits to the direct users of air transport services, the main economic benefit of increased connectivity stems from its impact on the long-term performance of the economy as a whole.

Improvements in connectivity contribute to the economic performance of the economy as a whole by improving its overall level of productivity. Productivity gains for businesses outside the aviation sector are achieved in two ways. First, the productivity of domestic firms is enhanced by their increased access to foreign markets, as well as by increased foreign competition in the domestic market. Secondly, productivity improvement is also due to the greater freedom of movement of investment capital and workers between countries.

Adolfo Suárez Madrid-Barajas and Barcelona-El Prat airports account for 41.0% of passengers, 32.4% of operations and 68.4% of freight in Spain. In addition, another five recorded traffic of over 10 million passengers in 2018: Palma de Mallorca, which exceeded 29 million; Málaga-Costa del Sol, with over 19 million; Alicante-Elche, with 14 million; Gran Canaria, with over 13.5 million, and Tenerife Sur with over 11 million. 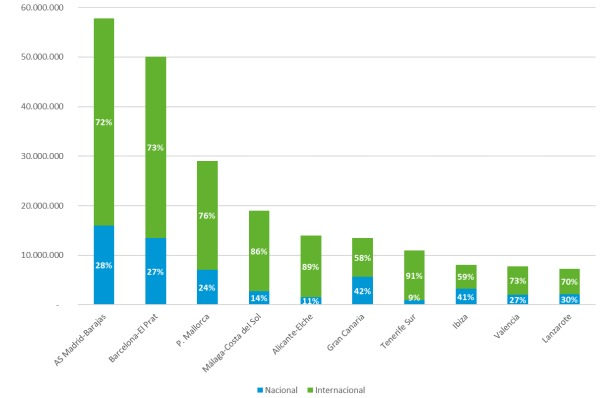 With regard to the type of traffic, 69.4% of commercial traffic at Spanish airports in the AENA network is international and the remaining 30.6% is domestic. The main countries of origin of air passengers to Spain are the United Kingdom, Germany, Italy, France, the Netherlands, Switzerland, Belgium, Portugal, the USA, Ireland, Sweden, Denmark, Norway, Poland and Russia. Spain received 82.8 million international tourists in 2018 , again reaching a record number, with an increase of 1.1% compared to 2017; a year in which, with 81.9 million tourists, we already occupied the second position in number of tourist arrivals, surpassing the United States for the first time and only behind France.